Vespa velutina or the Asian hornet, also known as the yellow legged hornet, is native to Asia. It was seen in Gloucestershire in September 2016, with the colony being found and destroyed. The hornet preys on honeybees. All beekeepers should remain vigillant and be on the look out for it in their apiaries.

Vespa velutina (Asian hornet) and Vespa crabro (European hornet) can be easily distinguished from each other. The Asian hornet is smaller than our native European hornet and has a black and yellow appearance which contrasts the brown and brownish yellow of V. crabro. Nests are founded by a single queen who rapidly starts laying eggs after building her nest in April. As the colony size increases through the summer, it will reach an average population of 6000 individuals and in July, hornets will begin predating on honey bee colonies; hornet brood requires animal proteins which are transformed into flesh pellets and then offered to the larvae. This hunting behaviour can continue well into the end of November. In autumn (around September), the nest will focus on the production of potential queens (on average 350) and male drones, who will mate with the queens. These mated queens will overwinter and leave the workers and males to die before winter. The following spring, the fertilised founder queens will begin the production of a new colony.

Monitoring for the Asian hornet

Firstly, make sure you know how to recognise Asian hornets – a very helpful ID sheet and poster is available for helping you to look out for the hornet: Click for an Asian hornet identification sheet

If you think you have seen an Asian hornet, please notify the Great British Non Native Species Secretariat alert email address at alertnonnative@ceh.ac.uk immediately. Additionally, you can report sightings on their website. Some helpful tips and advice on how to make your own trap can be found in the fact sheet Simple Asian hornet monitoring trap. Information from beekeepers in France shows that nest numbers are reduced by over 90% in areas where traps are deployed in springtime. Should the Asian hornets become established in the UK, springtime trapping will thus be a very useful management tool. When hanging out traps, please remember that it is important that damage to native wasps, hornets and any other insects is kept to an absolute minimum. 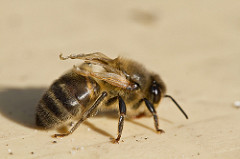 Researchers have tracked the spread of deformed wing virus (DWV) and found a link with the commercial movement of honey bees. Scientists used genetic analysis to characterise DWV and Varroa mites from 17 countries. Professor Stephen Martin of the University of Salford said, “It supports the idea that DWV is the main cause for the colony losses associated with Varroa and that this comes from European bees.” The researchers are calling for tighter controls and health checks during the import and export of honey bees.