Bees with radio tags glued onto their backs have been busily demonstrating just how long it takes them to get home, and how much easier it is to travel west. 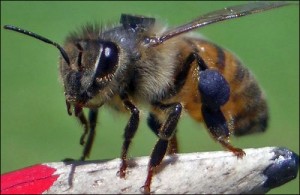 The tags used are 1×1.6mm and weigh 2.4 milligrams. Once properly tagged, the bees were released from various locations and an RFID reader on the hive noted their eventual arrival. That data then enabled the  boffins to deduce that nearby mountains were used for navigation, and the speed of journey was heavily influenced by landmark availability.

About 1km to the west of the test hive was a distinctive mountain, which (the researchers conclude) guided the bees who were released to the east, enabling them to make their way home from as far as 11km away. Those poor bees released as little as 6km to the west were, sadly, never seen again.

What the boffins didn’t see was bees dropping dead from radio waves, or being confused by having to enter the hive through a tunnel containing a radio signal strong enough to bounce a unique ID off their backpack-mounted tags.